From Boredom to Brilliance

Blog From Boredom to Brilliance

From Boredom to Brilliance

When Lockdown first started in March 2020, my parents and I fell ill; not in a serious manner, but still ill. I had to get better and I did fortunately. As I regained my energy, homeschooling was the last thing I wanted to do. So, I started to spend all day in the garden playing cricket. It was a good way to practice as restrictions meant I couldn’t go for my usual cricket training. It was hard but I managed. Instead of coaches I had my father; instead of a crowd, I had my mother and sister, XazQ. On bad weather days, I would watch cricket while playing cricket on my games console. How many hours must I have spent on it? As soon as the weather would improve, I would go straight back out. My daily routine was: Eat, Games Console, Cricket, Sleep, Repeat. That was my life for the first few months of Lockdown. The funny thing was that, even though it was baking outside, we couldn’t meet our friends and play cricket or have water fights with them. I was confined to the only person I could do these things with; my sister. We did a lot of fun and silly things, we even offered to wash our parents’ cars. Even though it was tempting, they refused, as they thought about the slippery suds all over our driveway and a white car (from all the soap) and a very wet one. 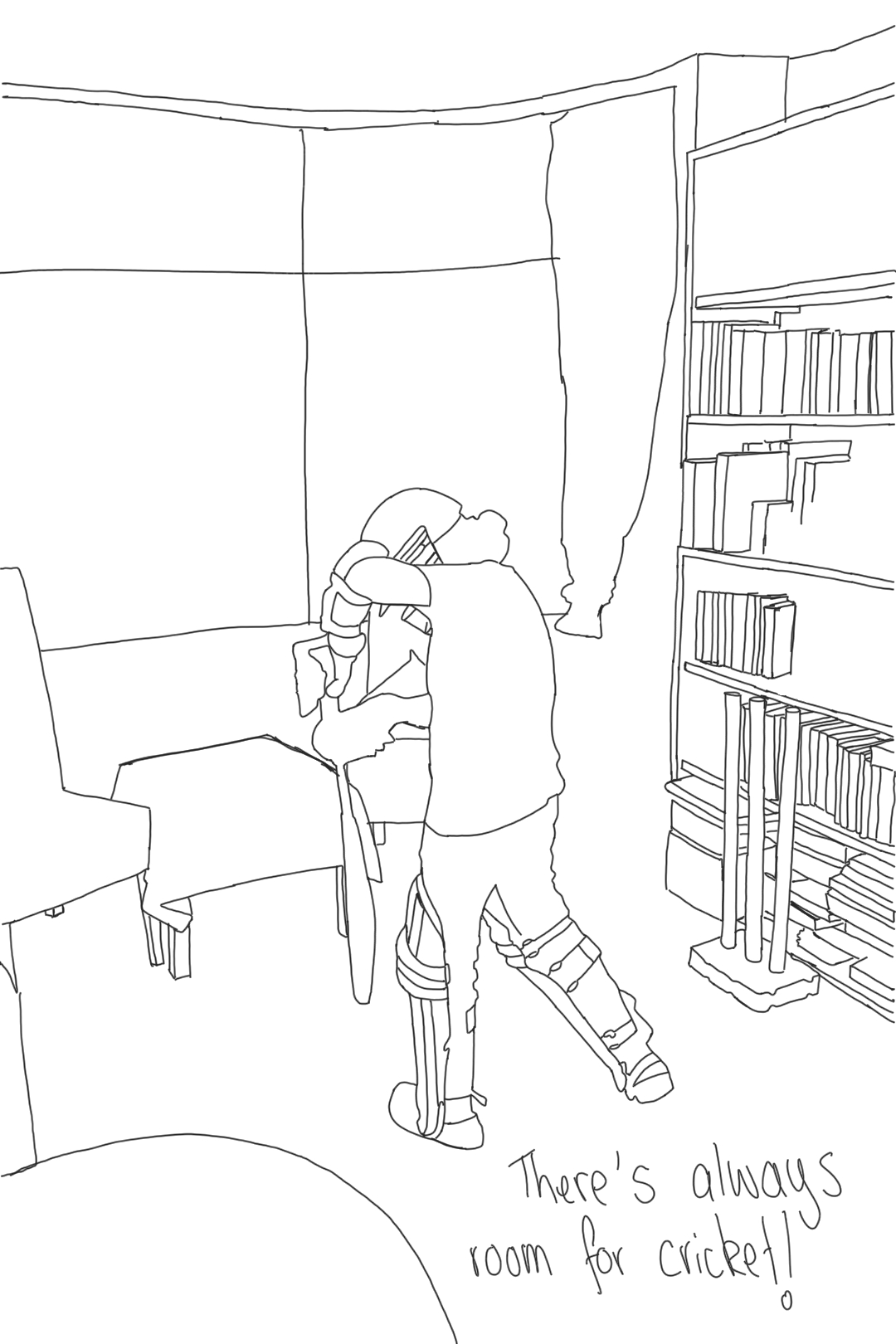 In the first Lockdown, there was something else that kept us busy - Clap For Carers. Instead of just merely clapping, XazQ and I would practise songs on our French Horns to play for our neighbours during Clap For Carers to lighten the mood. Our songs were: Somewhere Over The Rainbow, Avengers Endgame theme, and many more. XazQ painted a sign saying ‘Somewhere Over the Rainbow’ and we displayed it on our window. She also added some of her own paintings to cheer up people coming into our cul-de-sac. We also played a lot of board games. Our father fished out his old carrom board (a table-top game popular in India). We played it so much that we bruised our fingers. Then, we moved on to Monopoly. Every evening, all of us would get together and play a few very intense rounds of the popular game. Our Monopoly evenings still continue every weekend. It has been a saviour.

But the most creative thing we did was yet to come as that changed our Lockdown life forever.

Around day 50 of Lockdown (even though it had felt like a million), our parents urged us to do something with all our free time. We reluctantly agreed. Our parents suggested we create a memory box of our Lockdown experiences but XazQ and I decided to do something a bit more fun and creative. While brainstorming about what we wanted to do, XazQ wrote down her ideas and titled it “Children may be in Lockdown but their talent isn’t”. She can surprise me sometimes! We decided we wanted to make a newspaper or magazine as all the news in those days was quite negative so we decided that our publication would only focus on the positives of Lockdown. At first, we wanted to make it a hand-written magazine but once we started doing it, we realized that it would be quite hard to make and distribute due to the pandemic. Our mother, who would later become our honorary social media manager suggested to do it digitally instead. We both jumped at the idea, like a tiger onto its prey. At once, we got to work; we did it all ourselves, with the help of our easily accessible journalist. “Who is this journalist,” you might ask? Well, it’s our very own mother. We also got some help from our mother’s former colleague, who agreed to help us with designing the magazine.

XazQ painting the cover of the 2nd issue

One thing we couldn’t decide on was the name. After much deliberation, I decided to call it HomeCool Kids, as we were at home and being homeschooled, but also doing cool things. The first argument that my sister and I had about the magazine was about the masthead design; I won in the end. Our mother called it an editorial disagreement. We have lots more of those now!

Creating the first issue was fun. XazQ wrote her column, “Confessions of a Homeschooled Kid,” which was actually quite a funny read. She also painted smiley props and both of us modelled for the first cover in our back garden. We transformed our living room into an editorial office and the music stand was used as a meeting podium. We role-played editors as we discussed the content of the magazine. We still use the room as the HomeCool Kids editorial office. And so the first issue was created and we launched it on social media and distributed it via Whatsapp to friends and family and our respective schools. Little did we know that this magazine was not going to be a one off thing; no, it was going to be something huge… 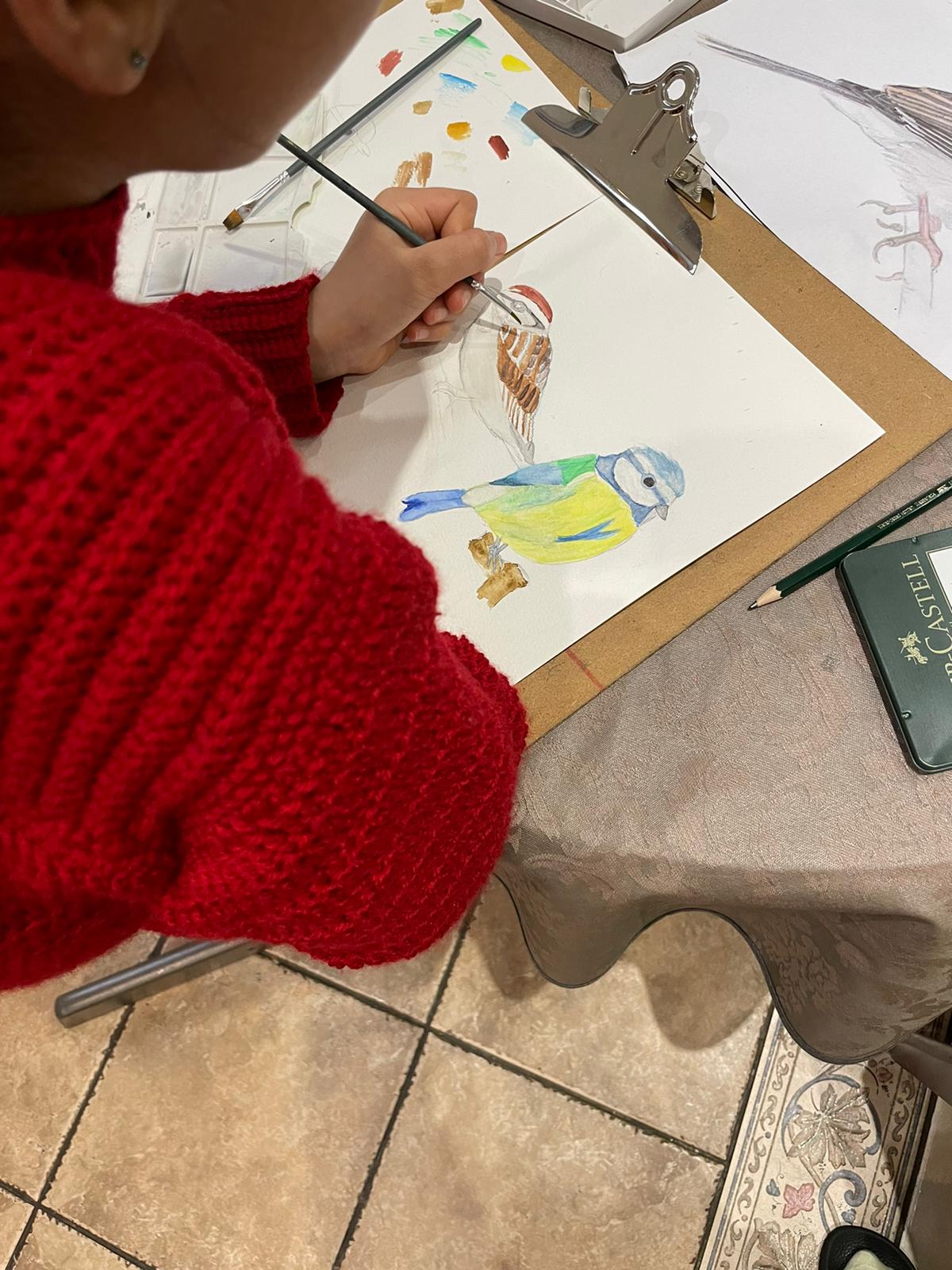 Mahnoor painting the cover of the 6th issue

We got lots of positive feedback for the first issue. After reading our magazine, our friends started contacting us, asking if they could contribute to it, so we got them on-board and started working on another issue. In the second issue, I wrote about how I lost 24 cricket balls in 10 days and how that made everyone happy. I was happy that the balls went so far; the neighbour’s dogs were happy, they got free toys; the only people who weren’t happy were my parents. I had to evade a telling-off from them by changing from T20 batting (basically hitting the ball as hard as I can) to Test batting (just keeping the ball low and slow).

Coming back to HomeCool Kids; after the second issue’s success, we started feeling we were actually doing something incredible so we decided to carry on. We’ve now formed an editorial board consisting of 10 members which includes us and eight of our friends including Mahnoor and Aadam. The oldies on the team; XazQ with some help from Aadam (as they are 12 years-old and the rest of us are still 10), also independently created our website www.homecoolkids.com. All our issues can be downloaded from our website for free. Please do check it out as they’ve made it without any grown-up help.

Our next issue will release in June; this would be our seventh issue. So, this is how the HomeCool Kids journey began; one word to describe it: WOW!!!

Comments from some of our contributors:

“My Lockdown experience: Some people may think that Lockdown was a terrible time for everyone. Although it was so boring to start with, we decided to make it fun for ourselves by entertaining ourselves in the house. We role-played with toys almost all the time; played hide-and-seek, and even went on walks, sometimes with our scooters and bikes! Gradually, our walks got longer and longer, which made it easier to walk as we built up stamina. It was quite fun as we made games for ourselves during these walks. As well as all these fun things, I decided to work for HomeCoolKids and help with the magazine! Besides writing for it, I also edited some articles to improve the magazine and attract certain audiences. I also helped XazQ with creating the website www.homecoolkids.com. I am now on the magazine’s editorial board and it feels great as we get to make decisions about its future.” Aadam Rasul (age 12)

“Play in Lockdown was very different, I have spent a lot more time at home finding things to do with my brother. Our favourite game to play indoors has been hide and seek. We have also spent a lot more time in our own garden, relaxing and reading books, playing and learning to garden with my parents. Spending more time together with my brother has also meant more fighting too! The Lockdown has also meant that we have spent more quality time with my parents playing board games, cooking together in the kitchen and watching TV (more than we are normally allowed!). I think we have been on more walks than ever before too! I have really missed my friends during the Lockdown but I kept in touch with calls and using the Google classroom chats. A group of us friends have worked on Homecool during the Lockdown and this has been an amazing experience and something that has kept us positive.” Mahnoor Daoudi (age 10)

Find out all about HomeCool Kids at:

We'd love to hear from more children about their experiences of making, playing and passing the time throughout the pandemic. Tell us all about it in our child-friendly survey.