In the fourth and final blog in her series, Yinka Olusoga looks back on the play of the winter months and beginning of spring in 2021, and how the return to home schooling, the weather and the eventual lifting of some restrictions offered opportunities for play and creativity.

January 2021 brings the return of national lockdown. It also brings several snowy days that continue into February. On snowy days and at the weekends my children spend more time outdoors. They go sledging, make snow angels and go for walks in the nearby woods. My husband has bought them both penknives, protective gloves and fire-steels. After a safety briefing he starts teaching them both to whittle fallen sticks from the trees, and how to safely set and put out a fire. Their trips usually culminate in heating up and drinking hot chocolate. My daughter takes photographs and sends them to me during the process as I am back to shielding and unable to tag along. 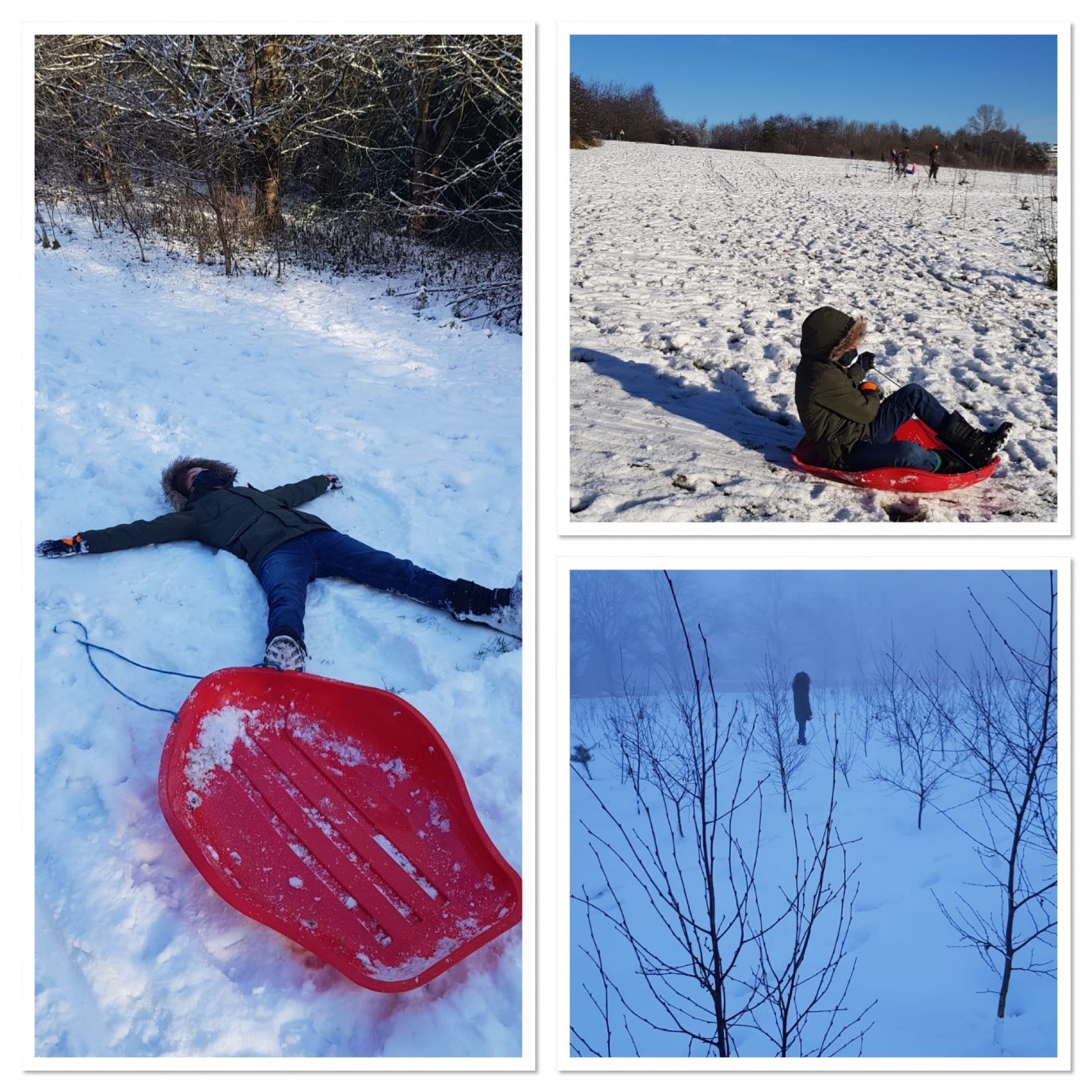 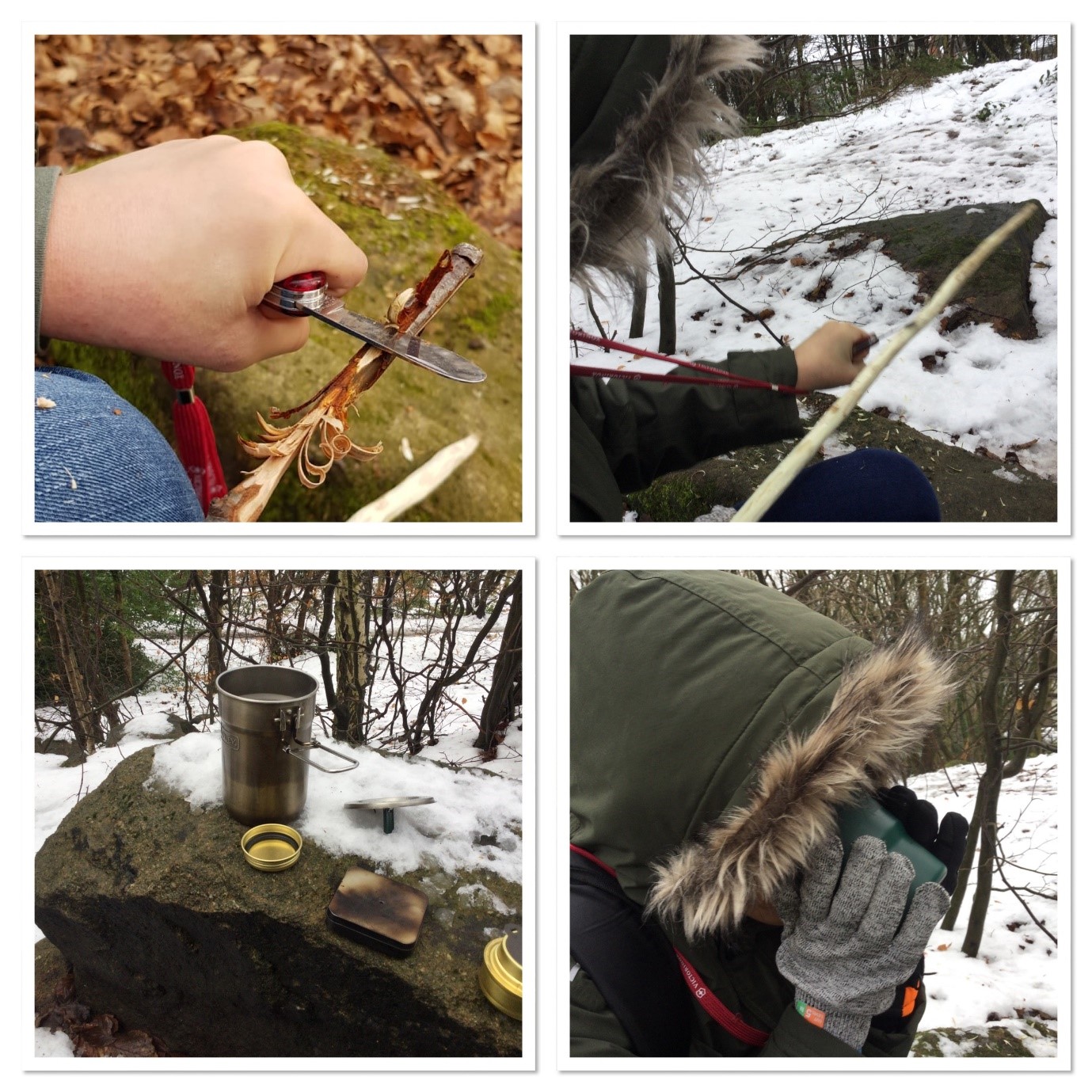 Whittling, fire-starting and hot chocolate in the woods, January 2021

In February, inspired by the Anglo-Saxon topic his class is studying during lockdown, my son decides to design and make his own Anglo-Saxon shield. He finds some images online, commandeers a large box from a recent delivery and carefully cuts out a cardboard shield shape. He draws on an Anglo-Saxon decorative design, which he then paints in red. He decides that he needs gold acrylic paint which we send off for. When it arrives he is excited to add the finishing touches to his shield. He has also started having a weekly online painting session with a younger cousin who lives 200 miles away. He shows her the shield he has made, and some Anglo-Saxon brooches he has designed, and she paints her own versions. Often these FaceTime painting sessions end up in games of hide and seek, as one child hides in their own home and the other directs their aunt or uncle to move round the house until they find their cousin.

In March the children go back to school and in April further lockdown measures start to be lifted. Shielding ends and it is possible to travel further for exercise and leisure. For the first time in weeks we drive into town and take a long route home. My son uses an iPad to take photos out of the car window throughout the journey. We get home and he uses an app on the iPad to create a photomontage series from the photos.

Photo-collage of a drive through the city, March 2021

This retracing of some of our steps over the last 14 months, reflecting on how my children have played and spent their leisure time, makes me appreciate two things. Firstly, how well the children have managed to keep play going despite the restrictions imposed by the pandemic. They have brought together resources from the physical and digital worlds to connect with each other more deeply, to interact and collaborate with cousins, aunts, uncles and grandparents and family friends, and to engage in creative experiences. Secondly, and in direct opposition to some of the assumptions about ‘lost learning’ that abound at the moment, they have developed new sets of skills, such as learning woodcraft from their father, and have been independent in generating ideas of things to do and exploring what it is possible to create with recycled materials and digital resources. They have developed a range of digital literacies, which makes me wonder how different their experience would be if they didn’t have access to technology. Finally, the amount of time they have spent together, often without direct supervision, as both parents have worked from home, has helped them to develop a deeper connection with each other. They’re a tight unit, with a shared set of experiences and vocabulary. Tuning into their conversations and in-jokes has been something that I treasure, even when it means that they’re presenting a united front in the back of the car, singing songs from the film Guardians of the Galaxy that they know I can’t stand, just to mess with me. As always, being involved in their play, even as the fall guy, brings me the kind of joy that is very much needed when life continues to be so uncertain.

What memories of children’s play and leisure do you have from winter 2021? Please share them with us by contributing to the Play Observatory online survey.