In a few days, Melbourne will have become the most locked-down city in the world. We still remember the uncertainty and fear when the pandemic first hit Melbourne in early 2020: there was the panic-buying at the supermarkets; the awkward walking-around-others on narrow pavements to maintain social-distancing; the mask-wearing ritual before you leave the front door; and the taped closing of playgrounds like they were crime scenes. Lockdown started, the city streets were empty, and there was a general fear hanging in the air when visiting public space.

Not only that, we also noticed a rapid emergence of social-distancing tapes in public space. Lines, dots, crosses, squares, arrows. It was initially quite a daunting sight, but when we observed them over time, we found them to be quite playful, almost reminiscent of playground markings. “What if we can create a playspace with these tapes?” we cheekily thought. “Perhaps we can play some street and playground games with them.” Essentially, we wanted to subvert the role of these social-distancing tapes from something that is traditionally used to isolate and keep people apart, to something that can actually bring people together through play. 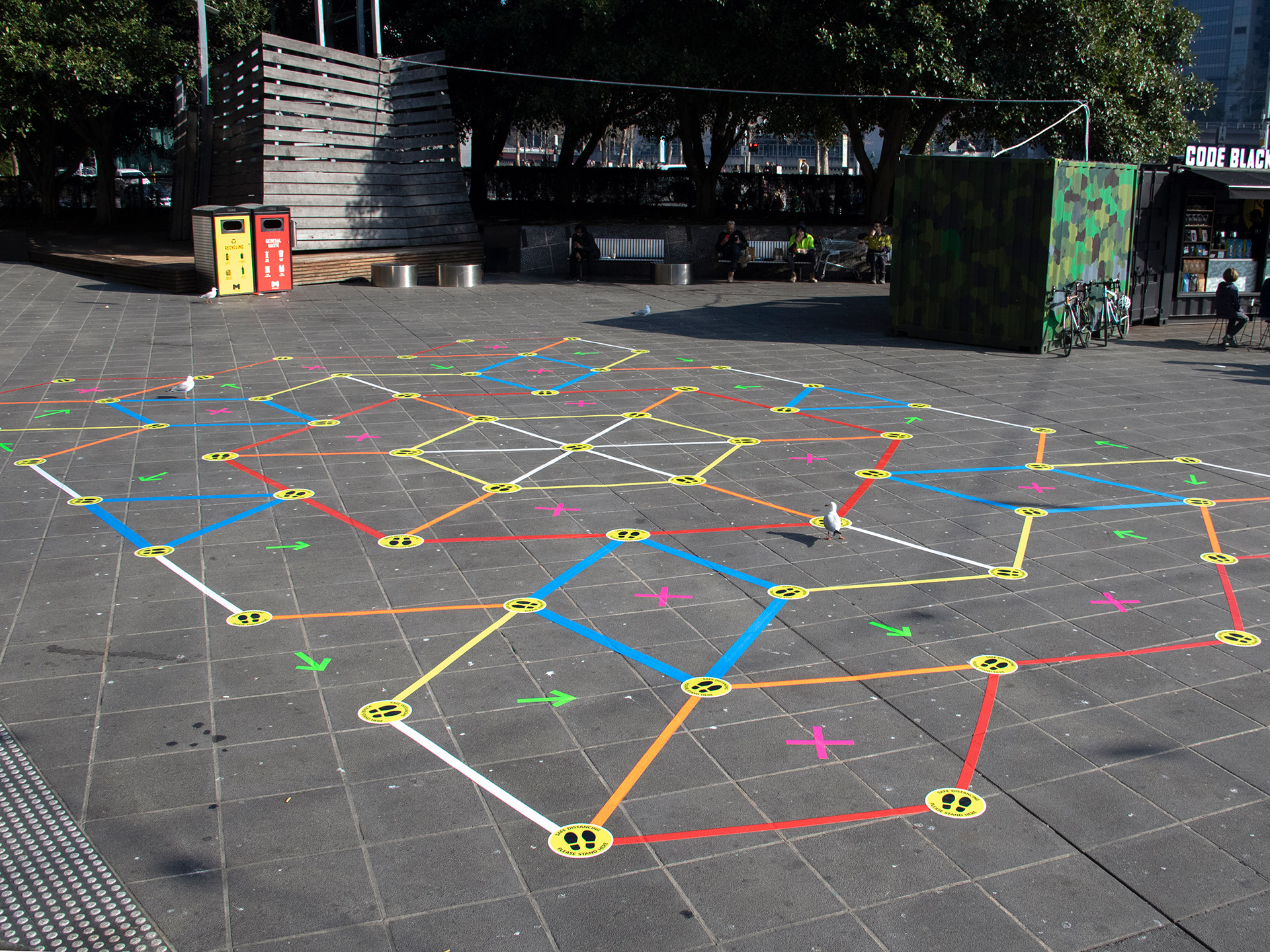 However, there was still the question of how we can safely play physical games in a pandemic, when body contact or touch are such a common mechanic in these types of games. How can we play tag when we can’t tag anymore? In the spirit of Bernie de Koven’s philosophy on the “well-played game” - to change the rules if it means allowing everyone to continue play - we decided to redesign a set of physical games that incorporated social distancing as a part of their gameplay. This was how Street Tape Games was born.

Street Tape Games is a temporary, public art installation that uses social-distancing tapes to create playful markings, patterns, and boundaries on the ground. These colourful markings create a playspace that the public can use to play a series of street and playground games that have been redesigned with social distancing. Through facilitated play sessions, we invite kids, families, and playful adults to play through each of the games with us, and encourage them to connect with their community again after lockdown. 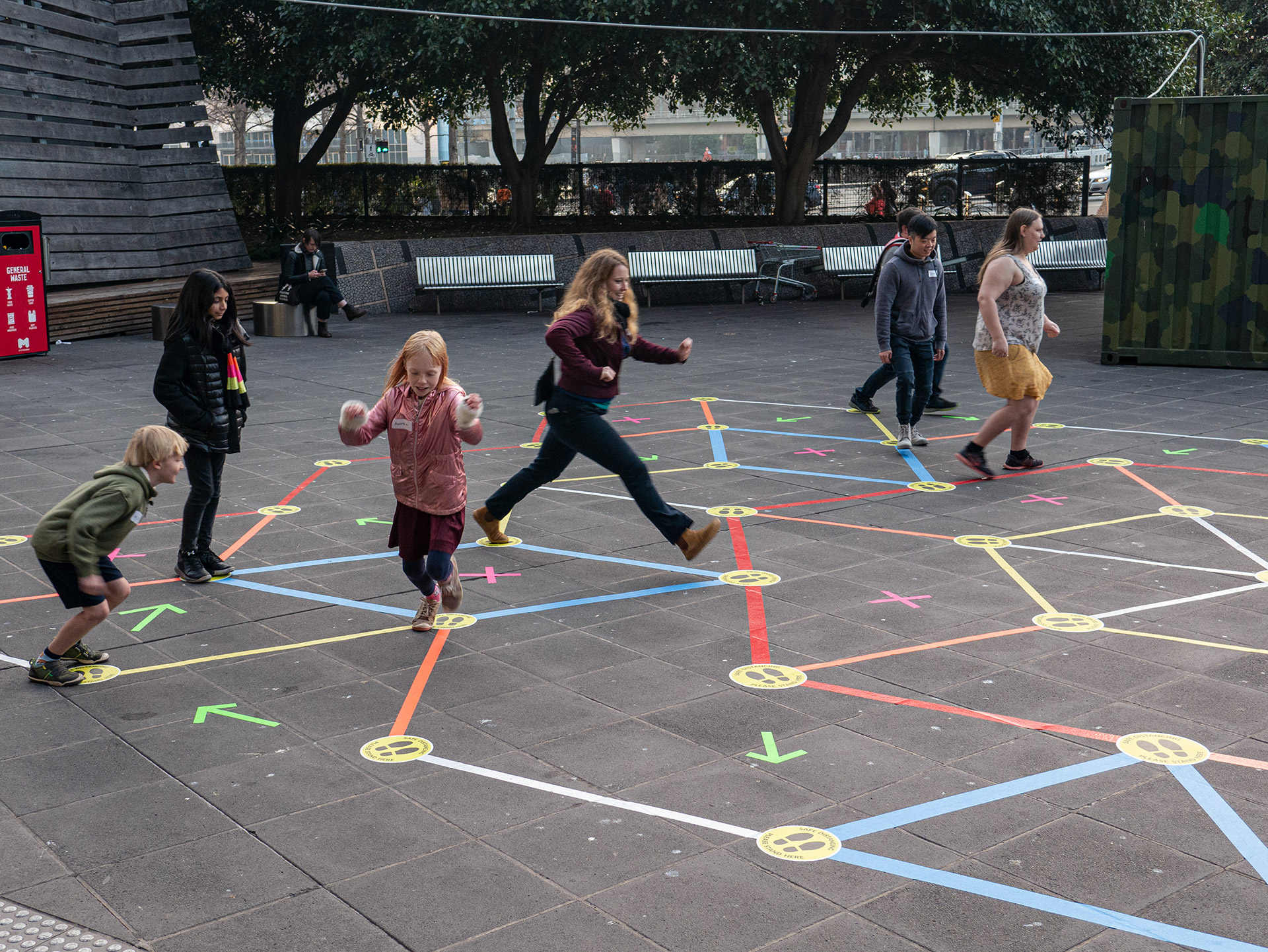 We redesigned eight games in total, taking inspiration from childhood classics and reinventing them to incorporate social distancing and no-touch elements. For example, in Mimic Me Foursquare, players battle it out Foursquare-style, but rather than hitting the ball to one another, players challenge each other with body actions and poses. Similarly in Verbal Tunnelball, players would use their voice to pass on fun verbal cues down the line as opposed to rolling a ball between their legs. Or in One Step at a Time, played like the traditional fast-paced game British Bulldog, but now as a tick-based strategy game, transforming the playspace into a giant board game. Young kids absolutely love playing some of these games with their parents, particularly Tape Statues (a combination of Statues, Touch Colour, and What’s the Time, Mr. Wolf) and Museum of the Replicas (a mimicking game where players have to follow each other’s poses). We found that kids loved seeing another side to their parents as they played the games with them. The games provided a safe space for everyone to be silly and unexpected, and even the most self-conscious adults would eventually give in and have fun as well. 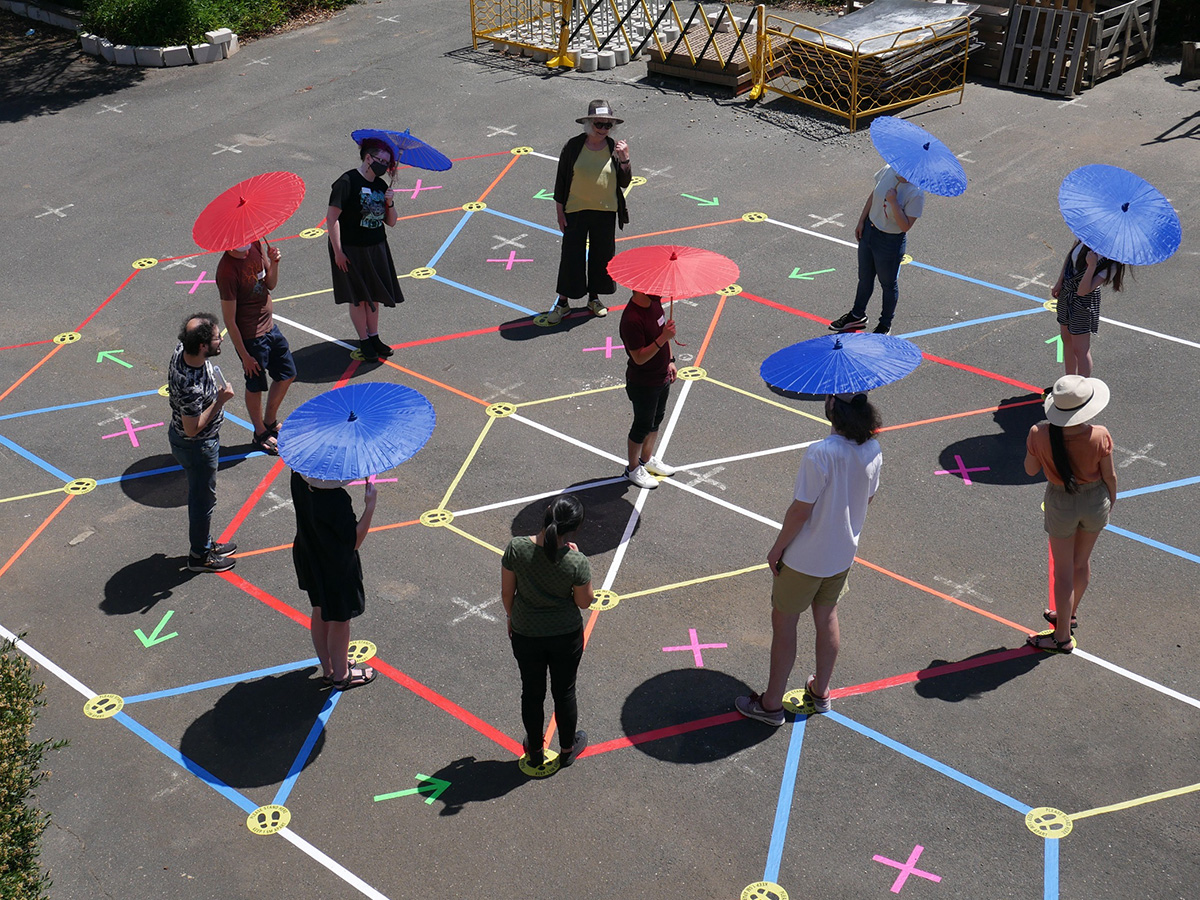 In saying that, we’ve always wanted to keep Street Tape Games open for emergent gameplay, allowing players to make up their own games if they wanted to. We’ve had many moments where kids who stumbled upon the installation (outside of a facilitated session) would just play with the tapes on their own! They would organically run along the colourful paths laid out in front of them, and the different patterns and shapes of the playspace allowed for many variations and permutations of emergent gameplay. We’ve found that these bright, colourful tapes naturally promote curiosity and playfulness amongst passers-by, giving them permission to play in public space. A mother of a girl who played in one of our facilitated sessions, and who lived in Melbourne’s CBD, was especially thankful for Street Tape Games, mentioning the need for more playspaces that allowed city kids to engage in outdoor play. 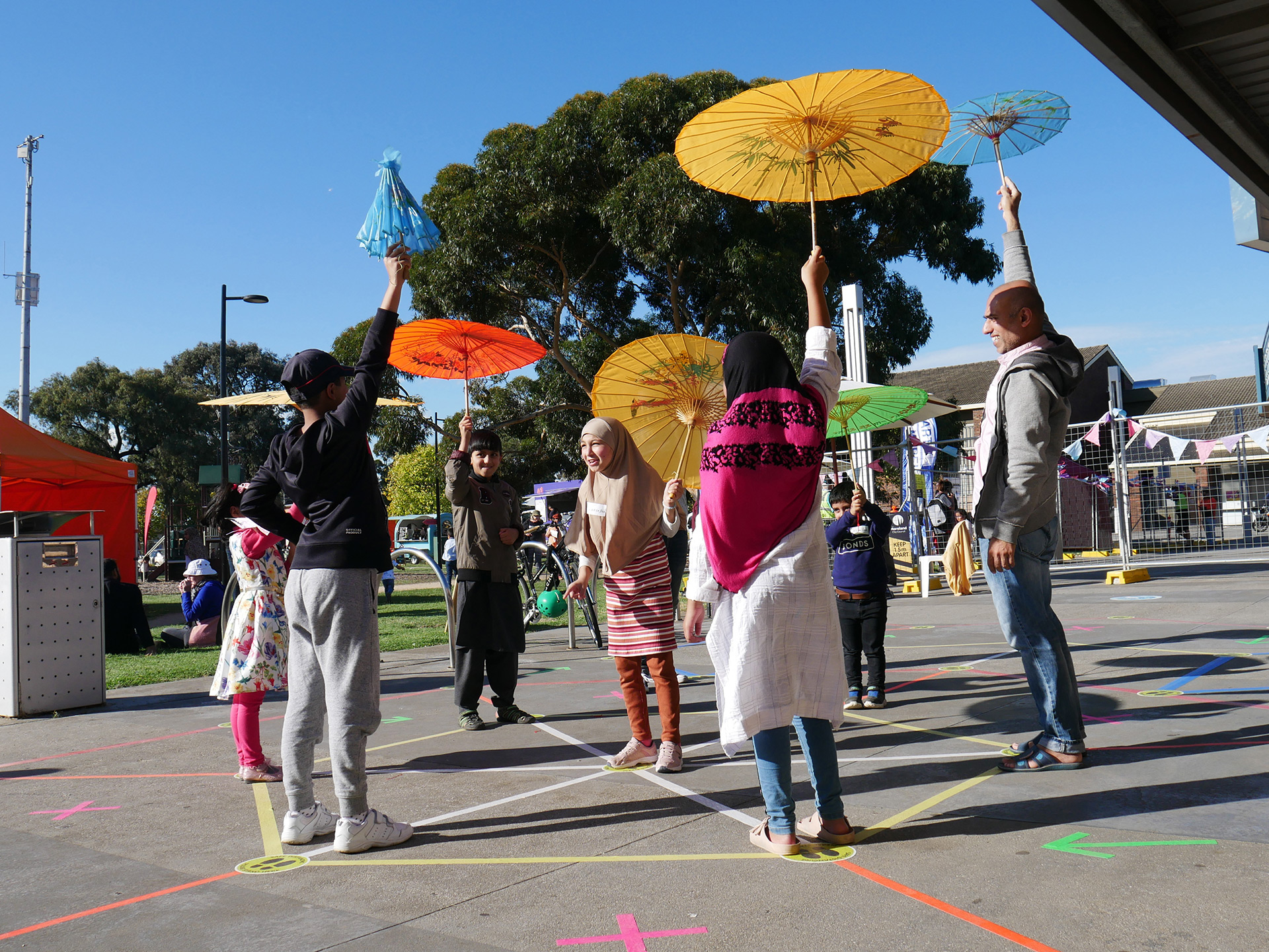 We hope that through Street Tape Games, we’ve brought a bit of joy to people’s lives, during a time of frequent lockdowns and uncertainty, and allowing them to safely play in public space again. Most recently, Street Tape Games made its international debut in London, showcased as part of the JUMP Festival run by the Waltham Forest Council. We wish to show people around the world that even with a slight change in mindset, we can still be playful during a pandemic.

Helen Kwok and Chad Toprak are an artist duo who create playful installations, experimental games, and public play activations. In 2020-21, they received funding from local city councils to develop a series of public art and playable installations that incorporated social distancing, with the aim to encourage people to come outside and play again after lockdown. The duo is currently based in Naarm (Melbourne, Australia), and have showcased their work locally and internationally.